Professor Knoesen performs research in areas of optics, electromagnetics and electronics that relates to the general area of applications of structured supramolecular functional composite materials and life sciences. The materials include electrooptic polymers, materials for biosensors, and biomaterials such as self-organizing protein structures.

The contributions of his group include the development of material processing techniques (e.g. corona poling of electro-optic polymers), optical and electronic instrumentation to characterize of unique properties of new materials (e.g. a microwave characterization technique of low-dielectric constant porous thin films) and demonstration of novel applications of electro-optic thin films (e.g. the first characterization of magnitude and phase of sub five fs femtosecond pulses, high-bandwidth inline-fiber electro-optic polymeric modulators). In the nineties his group’s interests expanded into the life sciences. His group applied rigorous coupled wave diffraction theory to analyze experimental results obtained from optical diffraction measurements of the organization in muscle fibers, participated in a microfabricated surface plasmon sensor and developed a multiple-beam fiber-optic trap. His group has developed a microwave planar transmission line sensor that allow the real-time detection, differentiation and quantification of biomolecules adhering to interfaces. The coplanar transmission line transit time probe has the unique ability of a to distinguish biomolecules based on their dielectric signature in the microwave regime. At present the main focus of his research is on the investigation of the self-organization of monolayers and protein assemblies. The experimental technique used are sumfrequency generation vibrational spectroscopy and polarization-modulated second-harmonic imaging, which is a technique developed at UC Davis. His group has identified the the molecular origins of second-order nonlinear effects in collagen fibrils with sumfrequency generation vibrational spectroscopy. Image signal processing methodologies are being developed to quantify the orientational order that is imaged by polarization-modulated second-harmonic imaging. 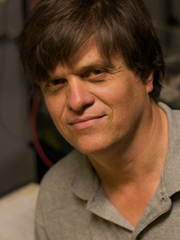