Dr. Upadhyaya began his career in 1976 as a Research and Teaching Assistant at Cornell University. After completing his Ph.D in Agricultural Engineering at Cornell, he went on to become a Research Associate with Cornell before becoming an Assistant Professor with the University of Delaware, Newark, Delaware. Dr. Upadhyaya joined the University of Davis as an Assistant Professor in 1983 and became a full Professor in 1992. During his career he has authored or co-authored countless journal articles, contributed and authored numerous books and book chapters, completed seven patents, and been the recipient of several prestigious awards. Most recently, he was awarded the John Deere Gold Medal for Advances in Soil Dynamics by the American Society of Agricultural Engineers. He was also awarded the Outstanding Engineering Faculty Award by the College of Engineering at UC Davis in 2018. His research in soil dynamics, agricultural machinery, sensors, precision agriculture, mapping, and more, continues to move the discipline of Agricultural Engineering forward. 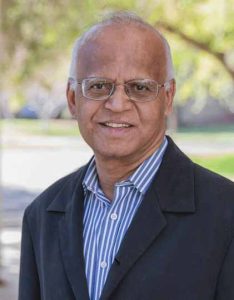