I am interested in teaching circuits, electronics and control engineering. Below is the list of courses that I teach:

EEC10 is our project-based course for sophomore students. The course was updated in 2018 and the new course project is a music-following robot implemented using Texas Instruments Robotic System Learning Kit (TI RSLK) which locates the direction of music being played in the room and moves toward it until it reaches to the speakers playing the music. The important feature of this project is that it includes various components covering a broad range of topics in electrical engineering curriculum as well as their interrelation. In this project, students work with two (right and left) microphones as their sensors to detect audio signals, work with analog op-amp amplifiers to amplify the sensed signals, send the amplified signals to TI MSP432 microcontroller to convert them to digital signals and finally process them in the digital domain to control the direction of movement of the RSLK. Some of the microcontrollers topics that students are exposed to include working with general-purpose input/outputs (GPIOs), analog-to-digital converters (ADCs), timers, periodic interrupts and Pulse-Width Modulation (PWM). 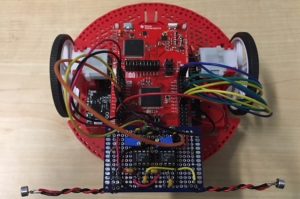 ENG17 is the first circuits course at UC Davis taken by most of students in the college of engineering. ECE students take this class in their sophomore year while other majors take it usually in their junior year. The topics covered in this class include resistive circuits, circuit analysis techniques, RL and RC first-order circuits, RLC second-order circuits, AC analysis and AC power.

EEC100 is the second circuits class for ECE and CSE students and covers topics such as operational amplifiers, frequency response of circuits and passive and active filters, applications of Fourier series and Laplace transform in circuit analysis as well as the two-port network theory. The course has a lab components in which students verify the theories that they learn in the lectures by first simulating the circuits in Cadence OrCAD and then building and measuring them.

The labs have gone through multiple rounds of revisions since 2016 and after the most recent update in 2018, a series of new labs were added in which audio signals in form of music are used to improve students’ understanding of the concepts of filters and frequency spectrum. As the final project of the course, students now design and implement a three-band audio equalizer for the specifications provided for bass, mid and treble bands. In all these lab experiments, students work with audio amplifiers which can drive their headphones such that they can hear the difference that their circuits make on the music signals that they supply to them.

I also have developed a library of supplementary videos using “Learning Glass” technology for teaching math and physics topics of this class including review of complex numbers and phasor analysis, Bode diagrams and Convolution integral:

I have recorded a set of supplementary videos using Learning Glass technology which cover basics of semiconductor physics, physics of biploar and MOS transistors:

This the second circuit course for non-ECE students and is an introduction to analog and digital circuit and system design through hands-on laboratory projects. I teach this class with an application-oriented style and I have redesigned the course to have an emphasis on different building blocks of a practical measurement system. In the lectures, students are introduced to the basics of electronic circuits and systems by first seeing a real-life measurement problem in the first lecture, followed by a discussion on how to synthesize a circuit that can solve that problem. After students are introduced to the “big picture” of a measurement system through an application example, the general building blocks of a measurement system and the role of each block in the chain is discussed. Throughout the quarter, each of these building blocks are explained in the lectures in the same sequence that they appear in this general block diagram. In the laboratory, students work on individual building blocks of a light-meter in weekly lab sessions and at the end, they connect the different building blocks together as the final project of the course to build a system that can show the light intensity on scale of 0 to 9 on a 7-segment display. 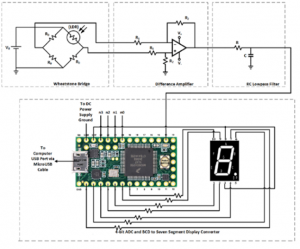 This is a new class that I developed in 2019 in collaboration with Texas Instruments. The course lectures are structured to cover electronic circuits for power applications, including linear voltage regulators, switching DC-DC converters, DC-AC converters (inverters) and AC-DC converters (rectifiers). The control loop and stability of circuits are also analyzed. The lab experiments aim to give students a practical hands-on introduction to various power electronics topologies and illustrate how theoretical analysis and conceptual modelling directly impact circuit performance. As such, most labs include a design problem and theoretical commentary, followed by a practical implementation on either breadboard or a Texas Instruments Power Management Lab Kit (TI PMLK). Several labs also include an OrCAD PSpice simulation component. 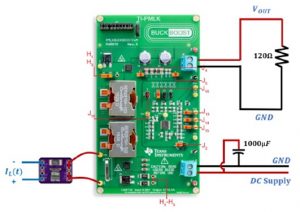 EEC157A is our control systems class in which topics such as modeling of systems in the Laplace domain, block diagram models and reduction of multiple subsystems, transient response, stability and steady-state error of feedback systems, root-locus techniques, design of PID controllers via root locus and frequency response techniques (Bode and Nyquist diagrams) are covered.

To provide students with a hands-on experience and an opportunity to apply the theoretical concepts that they learn in this important course. A new set of experimental modules were developed in fall 2018 using the Texas Instruments Robotic System Learning Kit (TI RSLK). By working on the developed experimental modules, students are exposed to software-hardware co-design and they solve a real-world controller design problem using hand-analysis followed by MATLAB and Simulink simulations and finally measurement of their designs to confirm if the design specifications are met. The experimental modules include measuring the approximate transfer function of TI RSLK using MATLAB System Identification Toolbox, designing a Proportional (P) controller to control the displacement of RSLK, and finally designing a Proportional-Integral (PI) controller to fulfill a zero steady-state error for ramp inputs. 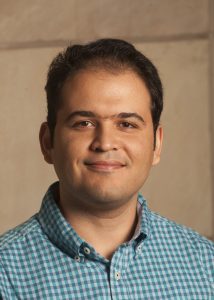