The technological and commercial importance of his seminal work led to the 2000 Nobel Prize in Physics for heterojunctions awarded to Herbert Kroemer and Zhores Alferov. His demonstration of the GaAlAs/GaAs heterojunction led to the creation of important new areas of solid-state physics, such as: superlattice, low dimension, mesoscopic, and resonant tunneling physics. Also, using the technique called molecular beam epitaxy (MBE) and the GaAs/InGaAs strained, non-lattice-matched heterostructure, he pioneered the “pseudomorphic” high electron mobility transistor (HEMT), a state-of-the-art high speed device widely used in devices and circuits including those found in cellular phones. This work led to the use of the pseudomorphic InAs/GaAs heterostructure to make “self-organized” quantum dots, a currently popular topic in physics.

His recent past work involves the MBE growth of III-V materials and devices with special emphasis on metal contacts, the thermodynamics of extremely large doping concentrations, and devices made of non-lattice matched heterojunctions and substrates. 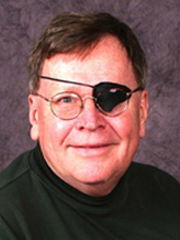