Stavros G. Vougioukas received his Diploma in Electrical Engineering from Aristotle University in Thessaloniki, Greece (1989). He conducted graduate studies in the U.S.A. under a Fulbright grant and several research assistantships. He received his M.Sc. in Electrical and Computer Engineering (SUNY at Buffalo, 1999) and his Ph.D. in Robotics and Automation (Electrical, Computers and Systems Engineering, Rensselaer Polytechnic Institute, 1995). Afterward, he worked for one year as a post-doctoral researcher at the Department of Industrial Engineering in Parma, Italy. Until 2011 he worked as faculty at the School of Agriculture of the Aristotle University in Thessaloniki, Greece. In 2012 he joined the Biological and Agricultural Engineering Department of the University of California, Davis.

He has published more than 140 journal and conference papers, most of them in agricultural robotics and automation. He is currently leading several research projects on agricultural robotics – focusing on labor-saving technologies – with funding from grower commodity boards, federal agencies, and private industry. 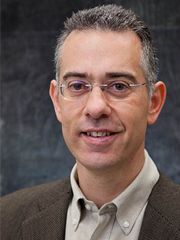